The GeneSearch Embryo Cradle is the most versatile and capable embryo manipulation tool. This breakthrough in embryo technology allows processes and procedures that were previously impractical or impossible.

Using our patented suck-and-puncture method, this is the only embryo tool that can:

Videos: Click on an image below to view some of the Cradle’s capabilities 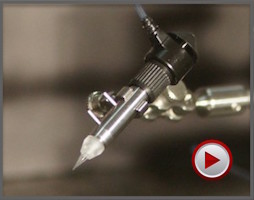 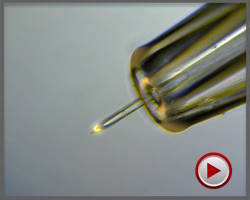 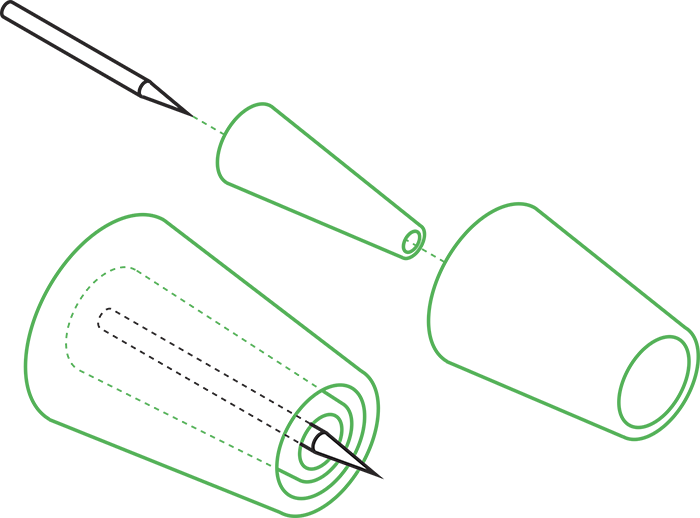 Coaxial nested tips provide an adjustable cradle for gentle support of the embryo. After years of experimenting with materials and design, the tips are now small enough for work with early mouse embryos, the smallest of all research embryos. 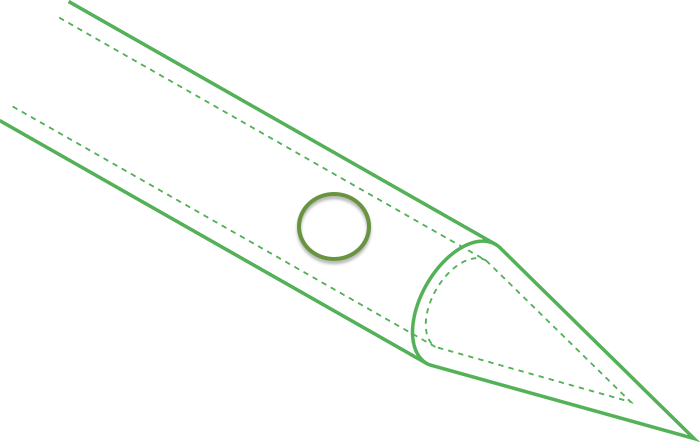 Probe diameters can vary from 12µm to more than 20µm, with biopsy ports varying in diameter from 5µm to more than 10µm. The biopsy port is a clean, sharp-edged, laser-drilled hole through the near wall of the probe, located near the tip. Our patented probe can be moved by hand or with an integrated air-drive pipette controller.

A system of internal O-rings and seals allow for separate control of vacuum:

The broad, gentle vacuum grip obtained on the nearside of an embryo allows for easy puncture of any pre-implantation embryo of any mammalian species.

The strategy that has been used for penetration of early-stage embryos during the past 50 years or more depends on compression of the embryo between a holding pipette and a sharp glass injection pipette, presented from exact opposite directions.  This strategy depends on the presence of an intact early zona. It is the structure of the zona, its resistance to deformation, which makes this possible. After the embryo escapes from the zona (a process called “hatching”), only the GeneSearch Embryo Cradle can hold and penetrate it easily.

This capability of the GeneSearch system to hold and puncture later-stage embryos is significant because human reproduction scientists now know that biopsy at a later stage provides a DNA analysis that is more useful for PGD (pre-implantation genetic diagnosis). For more dependable accuracy, the target stage for biopsy of human embryos has been pushed back a few cell division cycles, until the time just preceding natural hatching. Because the zona is thinner on these expanded blastocysts, the compression strategy for penetration is not effective or dependable.

For that reason, the accepted best procedure for biopsy of pre-implantation human embryos requires a grazing shot with a laser, to make a trench across the zona so cells can be obtained for analysis. Cells can be damaged by heat, or the embryo can hatch prematurely in the culture dish after the zona is cut by the laser shot. Once an embryo is hatched, there is no good standard procedure or tool for water volume reduction to improve freezing results, until now.

The GeneSearch Embryo Cradle allows biopsy of pre-implantation embryos at a later stage of development, right up to the time for implantation in the uterus. Then, after collection of a few cells for DNA analysis, even as part of the same procedure, this device can easily remove the contained blastocoel fluid to optimize the freezing process.

Dr. Taylor invented the Embryo Cradle to remove the water-solution contained inside llama embryos so they could be frozen successfully for the first time.  The two live llama babies he produced from frozen embryos were and are still the only two in history.  Now it has been shown that the Embryo Cradle is also the tool of choice for removing water solution from equine embryos, permitting successful freezing of horse embryos larger than 300um. (See this ground-breaking research paper by Fabian Diaz, published in Theriogenology)   This is very significant for many reasons, but especially because international movement of animal embryos is limited to those that can be frozen and held in liquid nitrogen for at least the period of incubation of any diseases that they might carry.

The Embryo Cradle permits total volume reduction of equine embryos without damage to the delicate capsule that surrounds them, and easy collection of the blastocoel fluid removed.  This may be important because early indications are that there is enough DNA in that fluid for determination of gender and possibly of many genetic characteristics of the foal the embryo will become.

Beyond that, the Cradle can be used for ICSI, the injection of a single sperm into the equine oocyte to create a viable embryo, and two of our Research Licensees are working to document that capability.  GeneSearch is actively seeking to sell the company or the patent rights for equine embryology to one of the major players in the equine scene as part of our strategy for commercialization of the Embryo Cradle.

It All Started with Llamas

GeneSearch is a small business owned by Paul and Sally Taylor, with office and lab facilities located in Bozeman, Montana. The Taylors, who were prominent llama breeders in the 80s and 90s, developed and taught the principles of embryo transfer in llamas and alpacas. They have produced more than 500 live llama and alpaca babies via embryo transfer, and have five significant scientific papers published in respected journals. The Taylors have an embryo transfer clinic (for work with llamas) and a well-equipped laboratory on their ranch adjoining wilderness land in southwest Montana.

After more than 10 years of research into the freezing of llama embryos, Paul invented a co-axial microtool for removal of water solution from the central space of these llama embryos. That procedure enabled him to freeze llama embryos successfully, to produce pregnancies and, eventually, the first two live babies from the frozen/thawed embryos of llamas in 2005 and 2006. The original tool was quite simple and at that time there was no indication that this new tool would have any significance beyond its application in freezing of llama embryos. After years of design and research, Paul’s simple micro tool has created a paradigm shift in embryo technology: The GeneSearch Embryo Cradle.

Paul and Sally Taylor, now both in their 70s, are preparing to sell the company and its patents. Their main goal in the continuing effort to develop and popularize the GeneSearch Embryo Cradle is to see the tool delivered into the hands of a reputable company or group of individuals who will continue the process of optimizing it and commercialize it for general use. They are not looking for investors, but rather for a business entity to take over responsibility for the future of the device. They would be happy to sell GeneSearch, Inc., with the intellectual property rights, or to license those rights on an exclusive basis. They will continue to fulfill their obligations in connection with the NIH grant projects in progress or pending, which will involve them for at least the next three years.